“EVE Online is a unique piece of science fiction that is ‘participatory’.”- CCP Seagull, December 2012

EVE Online is heading into its Second Decade with renewed vigour and a new development strategy. At the CSM Summit in December, Executive Producer CCP Unifex and Development Director CCP Seagull explained how future development and expansions will be broader in scope than recent “collections of features” stating that CCP “want to create something more inspirational, that players aspire to play.”

With the return of Live Events such as the Battle for Caldari Prime, clearly the prime fiction of EVE is back in favour as part of this new thematic approach to expansions. However, EVE’s story is very much a tale of two playstyles, with an entirely player-driven narrative unfolding daily in parallel to the reinvigorated backstory. Often, they do not mix well. How can these two disparate elements be united or at least comfortably co-exist in a single sandbox universe? 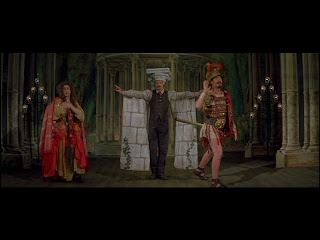 "So we grew together like to a double cherry, seeming parted, but yet an union in partition, two lovely berries molded together on one stem."
-William Shakespeare, A Midsummer Night's Dream

This is going to be a shorter answer than I typically give to such enterprising questions so please forgive me. I'm still getting my 'writing legs' back under me.

I'll make one further disclaimer before moving on; I've yet to see an instance in which CCP-driven story-telling and player-driven storytelling directly conflicted one another, or presented a situation in which one could not exist with the other. If I've missed some calamitous event in which the fourth wall came tumbling down, then I plead ignorance and you may safely dismiss the remainder of my opinion.

It is some kind of spectacle; this awkward, unelegant dance we do, CCP and us. We are not professional dancers or actors. We are the uncomfortable peri-pubescent teenagers who are awkwardly touching each other with only a vague notion of what they should be doing or where they should be touching. We only know we should be doing something together. And we know it's supposed to feel good, even if right now it just feels scary and uncomfortable.

This relationship is a beast that defies taxonomy. In our waltz across the heavens it is impossible to identify who is leading. We take turns. We move at different rhythms. We change styles. We improvise. But at the end of the day, we're still dancing. And we're having fun doing it.

To abruptly shift metaphors on you, our two canons intertwine to become a "play within a play." Each stage defines the other, and measures her boundaries. The rules, for lack of a better word, are reflected in the actors. And again, it is not a unilateral relationship. At times we are the spectators. At others, the spectacle. Teaching and being taught, relentlessly improvising both scripts and our comprehension thereof. It is marvelous theatre. We need only be taught how to participate.

Somewhat counter-intuitively, improvisation theater is based on a strict set of rules that must be followed in order to achieve success or at the bare minimum preserve immersion. The first and very most important rule is this: Always say 'Yes.' When you say yes, everything is possible. All doors are open to you. This is important, because a door once closed in this setting can never be re-opened.

The moment you start saying 'No,' the scene starts to break down and become unengaging. Any momentum gained is soon leeched out. Telling someone else they're "doing it wrong" is in fact doing it wrong. That god-damned sandbox manifesto, one more time.

Our twin canons can enhance each other, if we let them. EVE gives us the tools to create both tragedy and comedy. She creates the very stage we act upon. Our performances inform her design. Her iterations inform our performance. And on it goes. A play within a play. A waltz across the heavens. An immortal tale, a lifetime in the telling.
Posted by Firstly at 4/29/2013 10:39:00 AM

Firstly
Diplomat. FC. Explorer. I stand in awe of what is, and in wide-eyed of wonder of what may be.

Some of My Favorites